Bedsores or pressure ulcers are one of the main problems in bedridden or wheelchair dependent people and can present various complications. They require regular bedsore treatment at home in Delhi. 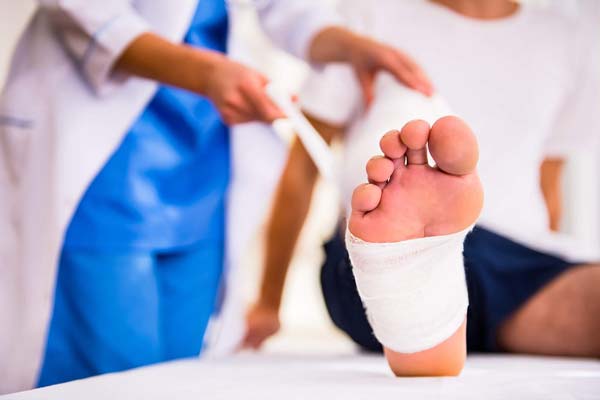 Thus, prevention is vital to avoid this type of skin injury, but it is also vital to know the different degrees that exist and what we can do in their treatment.

Bedsores are lesions that occur on the skin and underlying tissue due to pressure, rubbing or abrasion, especially affecting bony areas such as the lower back, hips, heels, and ankles.

Depending on its severity, up to four stages can be distinguished, being crucial to detect them in the first of them so that the treatment is more effective.

Why do they occur?

These wounds, also known as pressure ulcers, are common in people who are bedridden or with reduced mobility due to the continuous contact of the skin against a surface, something that is complicated in the following situations:

The symptoms of bedsores are very varied and range from a slight reddening of the skin to a deeper wound that can even affect the muscles or bones. Within this wide range of warning signs, the most common are:

As we indicated, pressure ulcers usually appear in areas where the skin surrounds the bone , the most common being:

There are up to four different stages that bedsores go through depending on the severity of the injury and the symptoms that occur. Identifying its stage will be essential to know how to cure bedsores in older people and offer a more effective treatment.

In the first symptoms of pressure ulcers, the skin will have a reddish, purple or bluish color without producing any change in color when pressing on the area. At this time there is no wound on the skin, although it may hurt, itch or have a different texture or temperature than the rest of the body.

At this second level there is a loss of skin tissue that causes the formation of a blister or even an open sore, the area presenting a more intense red color, visibly irritated.

In the third stage, the sore opens and sinks , creating what is known as a crater, already affecting the underlying tissue, but without presenting damage to muscles or bones.

At this level, the most serious, the injury is very deep , damaging muscles and bones.

In addition, there are other lesions that do not correspond to this evolution, such as subcutaneous ulcers in which the affected area has a brown or purple color.

How to cure bedsores in elderly people?

Most ulcers heal at home, but sometimes they will require medical assistance and even a prescription for an antibiotic to prevent infection. In any case, its treatment will depend on the degree of damage to the skin and, therefore, on the stage in which it is, but it is essential to keep the wounds clean and change the bandage after cleaning.

In the mildest phase, it will be enough to apply water and neutral soap to wash the wound and then apply a moisturizing cream.

When pressure ulcers are in a more advanced stage it is necessary to clean them with a saline solution to eliminate dead skin cells. It is important never to apply hydrogen peroxide or other iodinated compounds because they would damage the skin. Once the cleaning is done, the wound should be covered with specific bandages to avoid infection and promote healing.

In the more advanced and therefore more serious phases, the injuries have to be treated by medical personnel and follow the indications given by them regarding their treatment at home.

Some special dressings and bandages, designed to protect pressure ulcers and speed up the healing process, are applied by doctor when they come for bedsore treatment at home in Delhi.

Some examples of this type of product are:

Sometimes a third or fourth degree ulcer cannot heal and surgery is required to seal the wound and prevent further tissue damage.

A commonly used surgical technique for treating bedsores is called graft replacement (sometimes also called graft reconstruction). In this technique, the plastic surgeon uses a scalpel to debride the ulcer of necrotic tissue. A skin and muscle graft is taken from another part of the body and used to seal the ulcer.

Graft surgery is complicated in and of itself and can pose many difficulties due to the fact that patients who need it are already in poor health. As a result of these risk factors, there are a large number of possible complications that can result from surgery, including:

Despite the high risk of complications, surgery is a frequent clinical necessity to prevent life-threatening effects of bedsores, such as septicemia or gangrene.