An unattractive nose influences the overall shape and harmony of the face, which is why many people feel self-conscious and decide to have surgery to look good every day in front of the mirror. This is the reason why rhinoplasty is one of the most demanded cosmetic surgery operations and more than 100,000 patients go under the knife every year to have a nose retouched.

Deciding to have surgery should not be a decision made lightly. You must choose your cosmetic surgery clinic well and, very importantly, be advised by your plastic surgeon in Jammu, who is an experienced professional who will be able to recommend the type of surgery that best suits you.

Rhinoplasty lasts approximately two to three hours, after which the patient usually stays overnight in the hospital or clinic as a precaution. Not in all cases the use of nasal packing is necessary, if so, it will be removed after 24 or 48 hours, without associating any discomfort for the patients. The next day the patient can go home and begin recovery from there. It is important to take the prescribed medication and follow the instructions of your best plastic surgeon in Jammu, to ensure that the postoperative period is correct, with minimal discomfort.

The first days (7 to 10 days) after rhinoplasty, the patient must wear a nasal splint to ensure control of inflammation, proper healing and that there is no movement that could displace the recovering tissues and cartilage. In addition, during the first days, there may be small bleeding, so gauze is placed plugging the nostrils that will have to be changed regularly. If the bleeding lasts a long time or is abundant, it is important to go quickly to the doctor to check that the recovery is correct.

The postoperative period of a rhinoplasty can be a prior cumbersome or somewhat uncomfortable due to the importance of the nose in the respiratory process, however, it is one of the postoperative periods that allows faster incorporation into daily life, since after a period of between 5-7 days, the patient can go to work and lead a normal life as long as it does not include efforts or physical exercise until a month after the intervention. You can be a little hi chad and with some purples the first days, it is normal, improving quickly and progressively in a few days.

It will always be vitally important to heed the recommendations of plastic surgeons in Chandigarh, such as taking medication, sleeping on your back, wearing a nasal splint or avoiding sports, in order to have a faster and smooth recovery.

The recovery process may vary depending on the type of intervention we have undergone. It will depend on the structures that require treatment if it is necessary to work the bone if there is a deviation of the septum if the rhinoplasty is closed or open, but in general, it is not a painful surgery or a cumbersome or annoying postoperative period.

Reviews with your plastic surgeon in Delhi will also be of vital importance. The first revision is usually 4-5 days after the intervention, then 7-10 days to remove stitches and the nasal splint, subsequently spacing more and more in time: 1 month, 3 months, 6 months and 1 year.

WHAT IS THE CHIN IMPLANT

The chin implant is a surgical procedure through which a modification of the chin is made, prominent or removed, thus providing an improvement of the facial area, thanks to the use of silicone implants. The objective is to improve and balance the different facial areas, obtaining very natural results.

In addition to helping the oral area look better, chin implants can be used to correct congenital deficiencies and facial trauma.

The surgery chin or chin implant includes removing excessive adipose tissue area. In the case of a removed chin it will be improved with the insertion of the implant and in a prominent chin the bone will be reduced and sculpted.

The chin provides expression to the facial area, the best candidates are those who seek to improve the size and shape of their chin, thus highlighting the area of ​​the middle third of the facial oval. With this, it is possible to benefit those people who have a retracted chin and a prominent nose.

The chin augmentation provides balance and define the jaw and appearance of a large nose. This type of treatment is usually combined with a rhinoplasty or a cheek implant, thus achieving a perfect result.

HOW IS THE TREATMENT

The surgery chin augmentation in Delhi is characterized by being a process quickly and easily recovering facial harmony. As it is a minor surgery, the patient will not need a medical leave and within a few hours of being operated on, they can go home in perfect condition.

The procedure used for the chin implant is:

Once the operation is finished, the patient will feel a slight swelling in the treated area, which will decrease over the first week.

After the first 48 hours, the patient should start their treatment review sessions.

During the consultation with plastic surgeon in Karnal, the type, shape and size of the prosthesis will be evaluated in order to achieve the best result.

The results are practically immediate, the patient will have managed to harmonize the facial area with a natural result and without having any type of external scar. 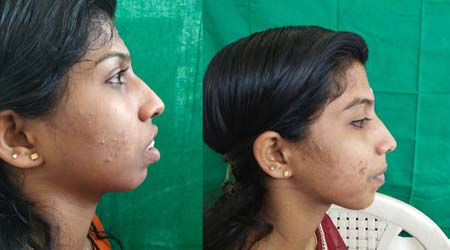 After the intervention, it is normal for the patient to feel discomfort, they may have small bruises and inflammation on the chin and on the face that will disappear after the first days. In the oral area it will have internal points that will be reabsorbed over time.

The patient must return to the different check-ups after the treatment (approximately 48 hours after surgery, 1 week, 15 days, 1 month, 3 months, 6 months and 12 months after the intervention). In some cases, a more exhaustive control will be necessary, which may go up to a total of 18 months.

Chin surgery manages to recover the harmony of the facial features in a fast and natural way for the patient.

This process has a number of advantages over other temporary treatments:

Dr. Sahil Singla is one of the best plastic surgeon in Delhi for reconstructive, aesthetic & cosmetic surgery.

A youthful, inquisitive look. In some cases, improved vision. Elimination of tear bags under the eyes.

Eyelid surgery is a significantly smaller surgical procedure than facelift, but can often have a significant rejuvenating effect on its own.

The skin of the lower and upper eyelids is very thin and the subcutaneous connective tissue stock contains few connective tissue fibers, so aesthetic complaints can occur relatively early due to various external, environmental influences and the genetically determined process of aging.

Aging of the skin of the upper and lower eyelids, loss of elasticity, flaccidity of the support system around the eyes, can lead to pronounced wrinkles, swelling around the eyes, which can result in aesthetic and psychological complaints. The skin protrudes, and as the connective tissue weakens, the padding adipose tissue protrudes, as a result of which the upper eyelid becomes flabby, sagging, and often can impede perfect vision. At the lower eyelid and due to striking wrinkles and adipose tissue accumulating behind the protruding skin bags appear.

It is recommended to do this if the skin of the upper eyelid is elongated, wrinkled, or possibly disturbing vision beyond the lash line. An incision made in the fold fold of the upper eyelid can be used to remove excess skin and adipose tissue. The resulting hair-thin lined white scar line is almost barely visible after 2-3 weeks.

At the lower eyelid, surgery is performed primarily because of the wrinkling of the skin and the appearance of so-called bags. In this case, the surgical incision is made directly below the lower lash line, which, as described above, also heals with a barely noticeable scar.

At the end of the eyelid surgery in Delhi, the wound is closed with one suture per eyelid (because the suture runs inside the wound along the length of the wound line) and with a paper-like wound dressing, which is removed after 4-5 days.

The tissues around the eyes are among the loosest tissues in the body, so after surgery, the eyelids swell and bleed. Leakage of pink, blood-stained discharge was detected in the wound line during the first 48 hours. The patient may feel tense, often tearing. Due to the swelling, the closure of the eyes may be temporarily imperfect or in the case of the lower eyelids, a temporary, slight twisting may also occur.

Because of all this, the surgical area should be iced for the first two days. If discharge is also observed, it is advisable to clean the landscape with chamomile. Using eye drops may reduce tearing. It is recommended by plastic surgeon to wear dark glasses for a few days after surgery. A 4-5. After eyelid collection during the day, eyelid washing is allowed. Face painting after surgery for two, eyelash painting for 3 weeks is not recommended.

Surgical scars are barely visible a few weeks after surgery and are virtually invisible after 3-4 months. The final condition of the eyelids is also approx. It develops after 2-3 months, although 90% of the results are visible after a few weeks.

The operation was performed as described above in addition to the complications that occur during all surgeries (bleeding, infection), it rarely has complications. Irritant symptoms (burning, itching, tearing, frequent conjunctival catarrh) if present are usually transient and rarely permanent. However, similar pre-existing complaints may be more pronounced after surgery. It does not affect vision. Repetition of the surgery may become due in 10-15 years.

Pros: Youthful, inquisitive look. In some cases, improved vision. Elimination of tear bags under the eyes.

With rare exceptions (thyroid dysfunction, diabetes, high blood pressure, tendency to bleeding, taking anticoagulants), surgery can be performed. It can be performed under local anesthesia, absolutely painless (except for the inconvenience of injecting).

A scar is a mark left after a wound has closed. Scar correction surgery can help improve the appearance of a scar or make it less visible. You can make it thinner or less elevated. If the scar is tight and limits skin movement, correction surgery can lessen the problem. No scar can be completely erased. But scar revision in Delhi can improve your appearance and reduce the discomfort it causes.

Scar revision surgery can be done in different ways. The method used will depend on the type of scar you have and where it is on your body. You and your plastic surgeon in Panipat will discuss these details before surgery. Some frequently used methods for scar correction surgery:

The day of surgery

The surgery takes 2 to 4 hours. Maybe you can go home the same day. Or you may need to spend 1 or more nights in the hospital or an ambulatory surgical center.

Before the surgery begins

Once you are home, follow the instructions you have been given. Your plastic surgeon will tell you when you can resume your normal activities. How to facilitate your recovery:

When to call your doctor

Call your plastic surgeon in any of the following cases:

You will have follow-up visits with your plastic surgeon to see how you are healing. During these visits, the provider will evaluate the results of your surgery. Consult your doctor if you have any questions or concerns.

Some of the risks and possible complications: